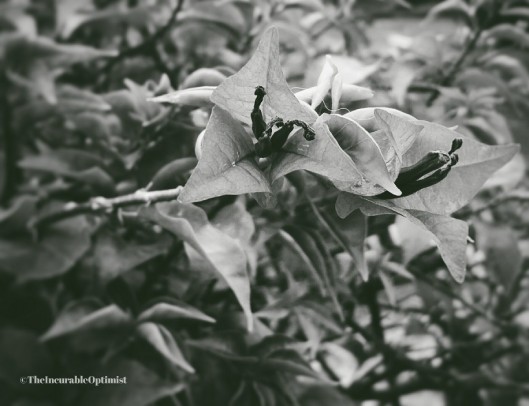 A picture is worth a thousand words I was told but they are wrong. Words are words and pictures are pictures. A picture says things that even ten thousand words cannot say.
So, as I looked at the picture I marveled. The beauty it captured. I was amazed that out of the seemingly ordinary something breathtaking exist.
“I have not been conscious,” I scolded myself. Or rather I have been too self conscious, too conscious to realise that there are other things to be conscious about other than to be conscious of myself.
I had never noticed the guard at the gate. The gap between his brown tooth, the hollowness in his eyes when he smiled and say “Goodmorning,” that I never responded to. I had never noticed the letters patched to the breast pocket of his shirt. They were just random letters stuck together in horrible fonts.
I had never noticed the boy who sells newspaper at the T-junction. He was the next constant thing in life after change. In the heat of the sun, the wet of the rains and even the cold that comes with December he was there satisfying our insatiable need for information. I would roll down the passenger window a few inch for him to toss a copy of “The Morning Post” into the car. I responded by throwing out cash at him and do not even see when he chased the notes flying in the wind. I had a streak to maintain at the office so I always beat the traffic light 20 meters ahead. An extra 20 seconds could mean ariving late at work.
The cleaning Lady at the office was just another statue to me. I cared less about how the office always had an overnight make over. The piles of shredded papers disappearing each morning. She would mumble something at me I only heard but didn’t comprehend. I wave at her very often because she would miss a spot or two when she cleaned.
The Tea Lady could be rechristened the invisible woman. I only rang her for coffee and when coffee came the soothing aroma makes me aware that it was 8:15 am. I never have my coffee earlier or later. I never noticed how she could synchronise her steps to deliver my coffee just at the right time. The second and third cups arrive at 11:30am and 4:04pm respectively.

I was regarded as being very detailed at the office. My MD bragged that nothing passed by without me knowing. My white long sleeved shirts spotless everyday of the week, the creases on my trousers no different. I won employee of the month eight months in a row and was the poster boy of hard work and diligence , I cared less about the opinions of my workmates. But I was oblivious to the happenings underneath my nose.

I always believed I had a perfect home, the wife and kids the best thing ever I told my friends. Truth is when Ygritte of GOT said “You know nothing Jon Snow,” my name could easily be swapped with Jon’s and it would make perfect sense. I didn’t see it coming until I woke up to divorce papers on my bedside table. The house was empty, they packed out while I was snoring in my sleep.

I continued looking at the picture, Gungor’s epic of a song “Beautiful Things,” was still on repeat. I had turned down the volume but it was just loud enough for me to hear it’s rich lyrics.
“All this pain
I wonder if I’ll ever find my way
I wonder if my life could really change at all.
All this earth
Could all that is lost ever be found
Could a garden come up from this ground at all?”
The words of the song echoed the feelings I had, so I left it on repeat. It was the message from God to me that morning. Tear drops left my eyes, rolled down my cheek and splattered on the picture. I tried to figure out how and where I lost it. I had the world in my hands, opportunities heckled themselves at me. And I would randomly make a choice because there was no bad choice to make amongs the countless choices that always littered my table.
But that day, I realised I majored on the minor and minored on the major. The people in my life I treated as pawns. They were all pieces of the jigsaw in the grand scheme of things called my life. And in all my getting I had lost what I should have kept.

“All around,
Hope is springing up from this old ground.
Out of chaos life is being found in You.”
Gungor’s words, they were the medicine I needed that morning.
“You make beautiful things, you make beautiful things out of the dust.”
Even though I knew that line was a prayer. I said the words to myself. Repeating it in between breaths.
“You make me new, You are making me new
You make me new, You are making me new…” determined I knew I could still make something out of the mess my life has suddenly became. And the picture I held in my hands was a more than a perfect example.

*******
It’s been five years now. The letters on the breast pocket of the gaurd at the gate reads “Kunle.”
Chike no longer sells newspapers, he went to school but retained his business, one of his boys supplies me the papers at home. I don’t always win employee of the month but I come home everyday to the warmth of my family.
I still have that picture, I look at it but it doesn’t speak as loud to me as my life does. A trip down memory lane assures me that surely, “He makes beautiful things out of the dust.”

1 thought on “Out of the Dust”